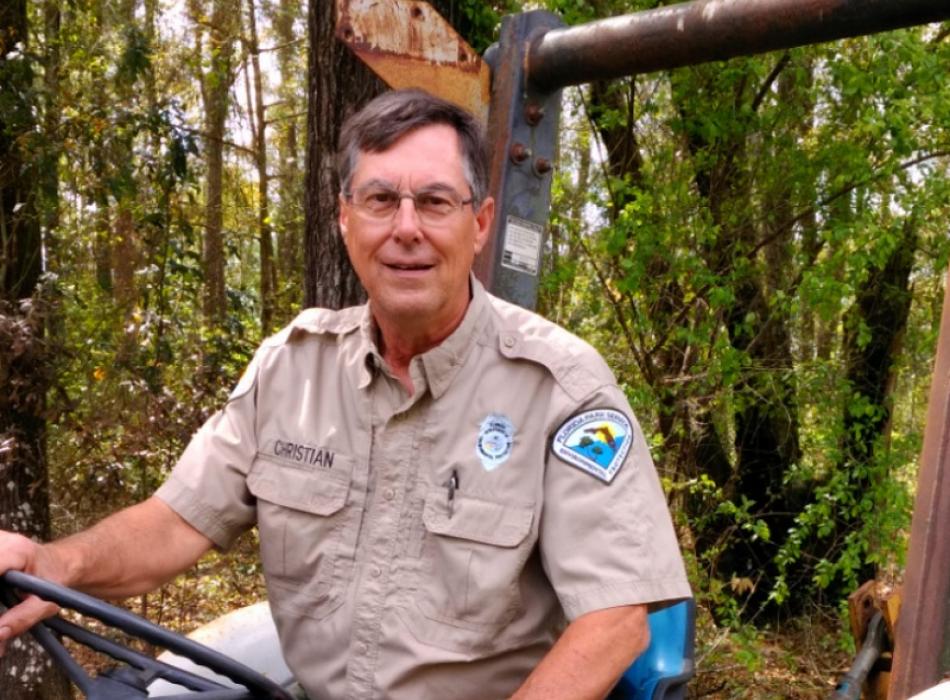 Ranger Stan Christian is a native-born Floridian, born in Live Oak and raised in Dixie County. He spent his childhood following in his granddad’s footsteps, hunting in the woods and fishing the saltwater flats at Horseshoe Beach. He came to love outdoor adventure even more through his Boy Scout experiences, and as a young adult he spent as much time as possible fishing, learning to repair motors and helping his father with carpentry projects on their house.

In the U.S. Coast Guard, he quickly learned the skills of a machinery technician on the Ice Breaker USCG Cutter “North Wind” with deployments to the Alaskan Arctic and the Antarctic “Operation Deep Freeze” McMurdo Station resupply. In 1989, while searching for a fulfilling career after leaving the military, he happened into an opportunity as a park ranger at Highlands Hammock State Park. He found that he could put his current skills to use and develop new ones while sharing his appreciation of the outdoors with park visitors.

Longing to return to North Florida, Stan and his family transferred to Suwannee River State Park in 1992. From 2000 to 2005 Stan was also assigned to Big Shoals State Park where he enjoyed being a part of the initial development of the park. When Lafayette Blue Springs State Park was opened in 2005, Stan became “first ranger,” a title that has become increasingly rare. He has worn all the hats in this park over the years and still enjoys the peaceful woods and solitude along the river.

Stan’s favorite spot in the park is the Allen Mill spring run, which flows over a half-mile through swamp bottoms into the Suwannee River. Its cypress knee lined banks and tall overhead canopy allow him to stop, relax and count his blessings in knowing he’s right where he belongs.

As Stan’s granddad used to tell him, ”If you can make a living with your hobbies, you’ll never have to go to work a day in your life.” Stan’s park service career has proven that fact for him.