The park is on the Great Florida Birding and Wildlife Trail. Wading birds are almost always present in Spring Garden Run. Walk the Nature Trail or the Wild Persimmon Hiking Trail to see other species. Bald eagles can sometimes be seen nesting in nearby Lake Woodruff National Wildlife Refuge and fishing in Spring Garden Run.

Enjoy a 50-minute eco/history boat tour on Spring Garden Run aboard the M/V Acuera. You may see a variety of wildlife and learn about the area's rich history.

Visitors on the restaurant waiting list are encouraged to enjoy a boat tour and you won’t lose your place on the waiting list!

Spring Garden Run starts at the park and connects with the St. Johns River, a distance of about 10 miles. Boaters are advised that there are manatee zones between the park and Lake Woodruff.

Jet skis are not recommended because of the shallow water in Spring Garden Lake and the presence of canoes, kayaks, and people fishing in the area.

De Leon Springs State Park offers a half-mile, wheelchair-accessible paved nature trail with interpretive signs. The trail passes through a floodplain forest with cypress, hardwoods and other plants native to this area, including a cypress tree that is more than 600 years old. An all-terrain wheelchair is available at the park; inquire at the ranger station.

Parts of the trail can flood during wet seasons and biting insects are common, so appropriate clothing and footwear are recommended, along with insect repellent and drinking water. Hikers must register at the ranger station.

The refuge is easily accessed by water and provides excellent birding and fishing opportunities.

Picnic tables and grills are available on a first-come, first-served basis in the shade of large live oaks. All picnic pavilions are on accessible routes.

Only instructional diving is permitted, taught by a certified and insured instructor holding a current Florida State Parks dive permit.

Snorkeling is permitted in the swimming area only and not in the Spring Run due to boats and alligators. All artifacts in the spring are protected by state law and must not be disturbed or collected. The use of metal detectors, magnetometers or other metal-detecting devices is prohibited in the park. 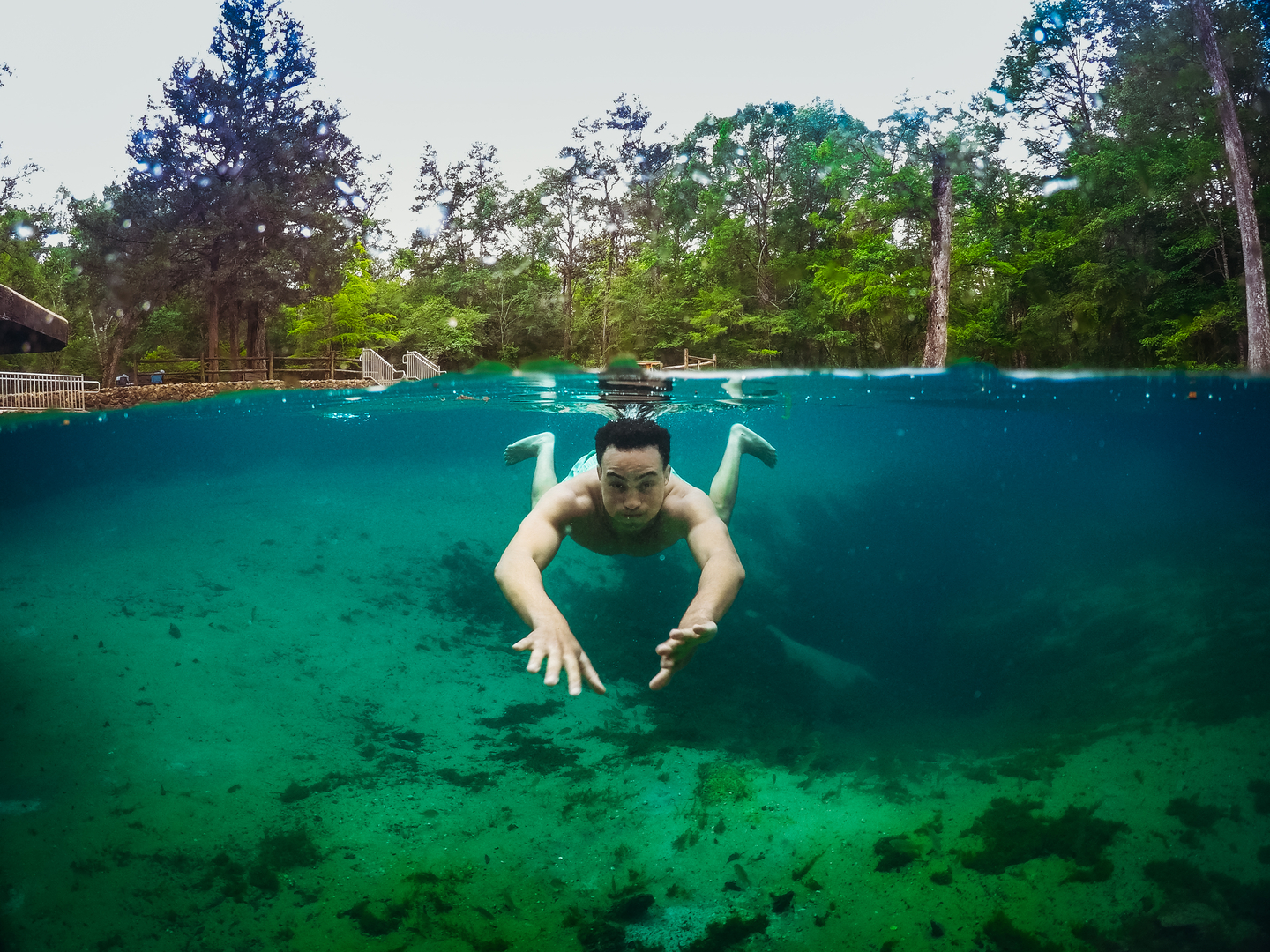 Swimming is permitted from 8 a.m. until a half-hour before sunset (park closing). The swimming area is a constant 72 degrees, and depths range from 18 inches to 30 feet at the spring boil.

Children and non-swimmers should be accompanied by an adult swimmer at all times and should remain in the roped-off areas.

The swimming area is approximately 500 feet in circumference; swimming nine laps around the pool would be about a mile.

Wildlife is plentiful and can be easily observed from the walkway across the spring. Otters, alligators, manatees, osprey, bald eagles, sandhill cranes and even a swimming black bear have been spotted.

Look for turtles with their heads above water in the Spring Run and be entertained by the jumping mullet.

A boat ramp and dock are available at no additional charge during park operating hours from 8 a.m. to sunset. Boats up to 20 feet can be launched depending on water levels of Spring Garden Run.

The popular Sugar Mill Restaurant, located in a 100-year-old replica of the original 1830s sugar mill, features cook-your-own pancakes at the table and freshly made bread and cookies.

Much of what you see here shows historic human activity, starting with the structures at the park entrance dating back to the 1950s attractions-era billboard with advertisement, concrete walls, gate houses, iron gates, and the building with the Florida map mural that is now the ranger station.

Shell mounds underlie many of the park's structures from thousands of years of native people inhabiting the area. The residence near the spring is constructed on one of the mounds.

The plantation era, when enslaved Africans were forced to work, is represented by the remains of the sugar-making operation, brickwork from the boiling kettles, mill machinery and kettles, and the original mill wheel hub located behind the restaurant.

In the early 1900s, the restaurant building was constructed on the foundation of the 1830s mill. The large chimney dates back to the mid-1800s. Another vestige of the attractions era remains near the restaurant - the Fountain of Youth. Although not flowing, an interpretive sign describes its function.

And as you are leaving, stop near the ranger station to look at the early 1900s horse-drawn road grader that park staff found in the woods here.

While enjoying the park, remember that you are walking in the footsteps of history.

Interpretive signs and kiosks are located throughout the park. Topics include Spring Garden Plantation, the attractions era, animals, plants, Florida's springs and a 1900 horse-drawn road grader. Also, visit the butterfly garden near the main parking lot.

De Leon Springs State Park offers a half-mile wheelchair-accessible paved nature trail with interpretive signs. The trail passes through a floodplain forest with cypress, hardwoods and other plants native to this area, including a cypress tree that is more than 600 years old.

An all-terrain wheelchair is available at the park; inquire at the ranger station.

Pets are welcome at De Leon Springs State Park. All pets must be on a hand-held, 6-foot leash at all times.

Restrooms are conveniently located near all park facilities. Restrooms, sidewalks and boardwalks are wheelchair accessible.

An outdoor shower is available outside the main restroom.

Exhibits feature the park's 6,000-year history starting with the Native American inhabitants called the Mayaca through the 1960s attractions era. Don't miss the home movie (open captioned) of the water skiing elephant. A touch table with bones and shells, park photo albums, printed information and a children's area ensure there is something for everyone.