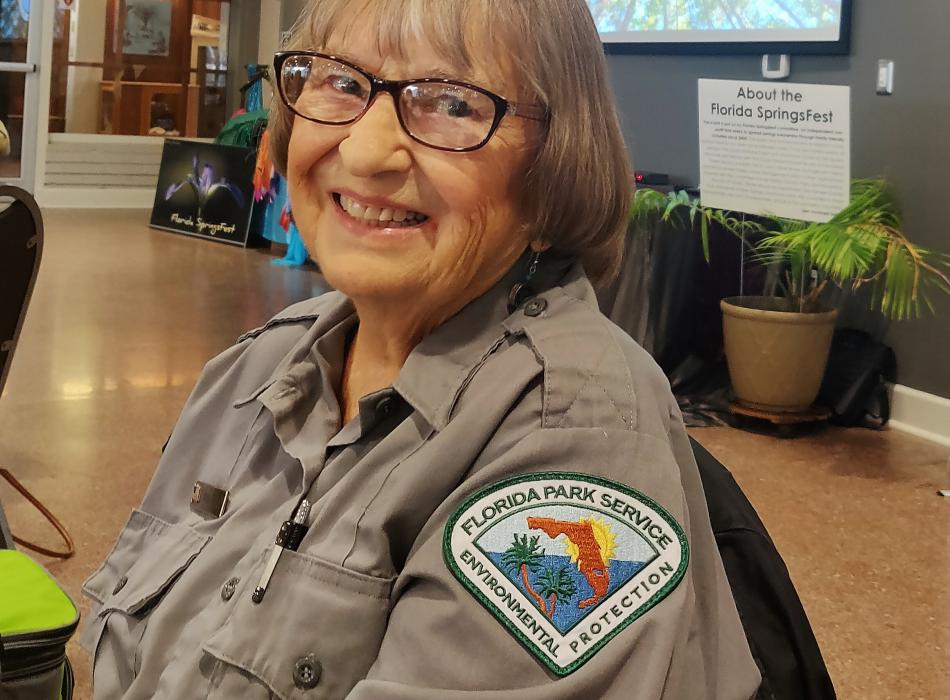 St. Sebastian River Preserve State Park is honored to introduce you to Jodi Gregg. Jodi is from Ohio and grew up in the little village of Ashville. The people of Ashville were known for their grit, toughness and faithfulness. This is important because if you know Jodi, you know that every bit of that town's toughness, faithfulness and grit is packed into her 4' 10" frame.

Jodi began her life of service at a young age. When Jodi was a teenager, she filled her days serving her local high school and classmates by working in the library. After she graduated, Jodi went to nursing school to become a registered nurse. Jodi put that degree to good use by working in the nursing field faithfully for 40 years. She also made sure to surround herself with people of service.

She married Jim, who served in the U.S. Air Force and worked with defense contractors. Jody and Jim went on to have two daughters, five grandchildren and a great-grandchild.

Jodi and Jim eventually relocated to Florida and, in 2007, the Florida Park Service and Sebastian Inlet State Park were fortunate enough to gain Jodi as a volunteer. One year later, Jodi signed up as a volunteer at St. Sebastian River Preserve State Park as well. Jodi served at Sebastian Inlet from 2007-2017 where she worked the Ranger Station and led the show team. She also volunteered at Sebastian River Preserve from 2009-2019 where she brightened up everybody's day at the visitor center and continued to lead the show team.

Jodi is moving to North Carolina on November 16 to live with her daughter and grandchildren. St. Sebastian River Preserve State Park will never be the same but will always be forever changed because of the time we had with Jodi. Her beautiful smile, extensive knowledge of the preserve, lengthy conversations and perfectly cut bangs will be missed.

“I always tried to leave people with a smile, so they weren't as grouchy when they left as they were when they came in.”  – Jodi