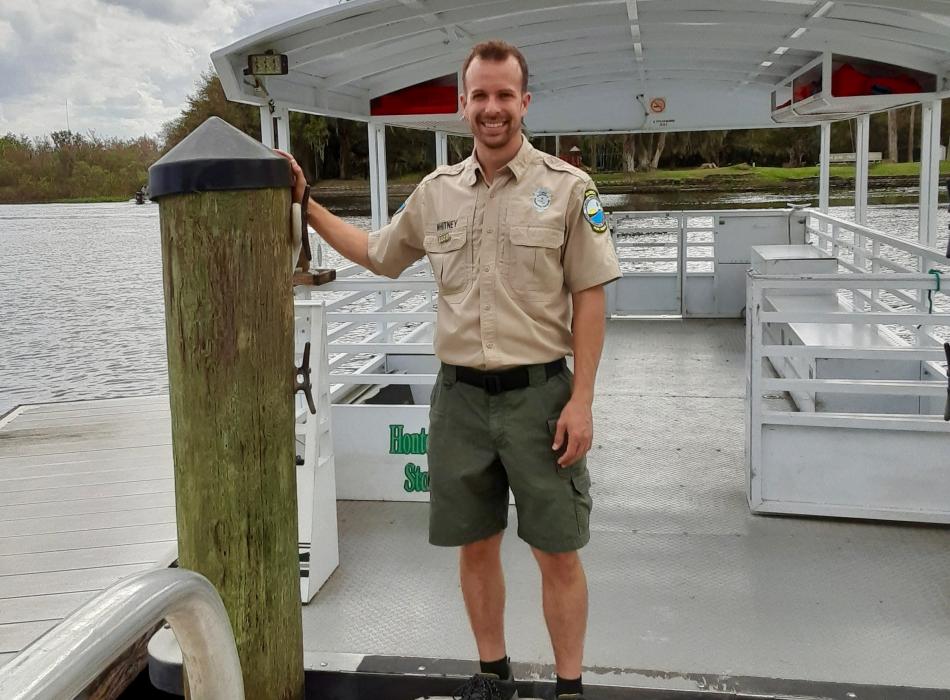 Meet Devin Whitney, the newest park ranger at Hontoon Island State Park! Devin grew up in Battle Creek, Michigan, and moved to Florida seeking opportunities in his field in 2013 after studying Recreation at Western Michigan University. He visited Florida a few times during his childhood and enjoyed it more each time.

He has loved the outdoors as long as he can remember. His family enjoyed camping, outdoor sports and games. He played outside often as a child with friends and through organized sports. He enjoys how he feels outdoors and believes it promotes feelings of well being whether he is working or recreating. In his downtime he enjoys hiking the trails and kayaking the rivers.

Devin has been working with the Florida Park Service for three years and comes to us from St. Andrew’s State Park in Panama City Beach; he traded the beach for the island. He wanted to become a park ranger so he would have the opportunity to work in a park, he knew he would enjoy it.

Day to day, Devin enjoys helping others have a great recreational experience. He believes play is important for people of all ages so he loves contributing to inclusive, safe spaces where people can enjoy their free time. His favorite thing about his job is participating in prescribed fires.

Devin's advice when visiting Hontoon Island is to make the best of your visit whether visiting for leisure, exercise or a picnic. Explore the designated areas and take in the Real Florida.

Going for a hike on the Hammock Hiking Trail and kayaking along the Hontoon Dead River are his recommended must do's. He also suggests being on the lookout for wildlife such as the American alligator and birds of prey such as the barred owl, red-shouldered hawk, bald eagle, kestrel, and osprey.

He has quickly mastered the ferry and consistently provides excellent customer service both during the day and for overnight campers. His friendly demeanor and approachability make him a pleasure to be around. Ranger Devin looks forward to seeing you at Hontoon Island State Park!