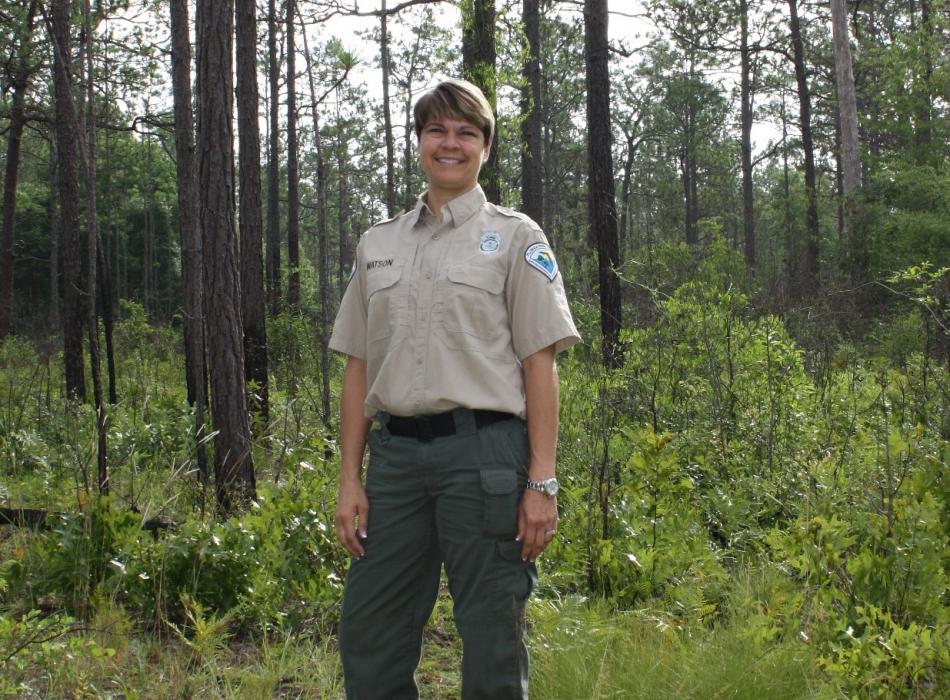 For the past seven years, Park Services Specialist, Angela Watson has exemplified the motto “Ranger First!”

Growing up in south Florida, Angela Watson enjoyed all aspects of being outdoors; from hunting and fishing to camping and boating with her friends and family.  When she moved to the northern end of the state it wasn’t long before a friend that was already a park ranger encouraged her to apply.  Angela jumped at the chance.

Starting out at Suwannee River State Park as an OPS Administrative Assistant, she gained valuable exposure to all things Florida Park Service. Soon after, Angela made it a personal goal to become a park ranger.

In 2014, a position became available and she knew it was meant to be. At this point, she was already involved in the prescribed fire program, as well as assisting in interpretive programs - it was a natural fit.

In the fall of 2017, Angela moved to her current position as park services specialist at Madison Blue Spring State Park. Angela enjoys the ever-changing atmosphere that a spring park provides. Year-round visitor service is at the forefront of all daily activity.  She enjoys interacting with a wide array of visitors with different backgrounds and various motivations for visiting the park.

Whether you come to picnic, swim or explore the underwater cave system, you’re sure to see Angela doing what she loves most- protecting this spectacular respite of green space.

Her true joy comes from the small victories, such as seeing a child make an emotional connection to one of Florida’s valuable natural resources. She prides herself on her ability to facilitate these moments of reflection and fosters a sense of wonder for the park she protects in everyone she comes across. Angela enjoys making these connections fun and delivers engaging interpretive programs that teach the public the importance of protecting the aquifer, not just for today, but for generations to come.