The hooded pitcher plant (Sarracenia minor) is widespread in North and Central Florida but still rare (Listed State-Threatened) due to its narrow habitat requirements. This carnivorous, wet flatwoods plant needs fire to thrive and reproduce. Fire helps prepare the soil for the seeds to germinate. At Paynes Prairie Preserve State Park, it has only been known to exist in one area of the park.

Each pitcher leaf is shaped like a tube and ends in a curved hood. When an insect enters the tube, it is trapped. The hairs on the inside of the hood point downward, preventing escape. The insect eventually dies, and the hooded pitcher plant digests the soft parts as it decomposes.

The area where the pitcher plants have been found in the park is less than 15 acres of wet flatwoods. It has only been burned three times in 30 years because of its proximity to nearby roads, access problems due to heavy rain and smoke concerns for motorists. As a result, only six to seven hooded pitcher plants remained on the open edge of the zone near the fire line.

Park staff, aided by the district PINE team (dedicated fire managers who work regionally with state park staff), decided to return fire to this zone in April 2019 after a six-year absence.

All 15 acres were burned with a target of reducing as much partly decayed organic matter (duff) on the forest floor as possible. The seven-hour burn was followed by eight hours of difficult work to ensure that the fire was extinguished. Adding to the challenge, every vehicle used on the fire was stuck in the duff at least one time. Though difficult, an overgrown shrub layer was reduced and inches of decay were burned off.

Keith Morin moved from Massachusetts to Florida in 1993. He worked National Service positions (Student Conservation Association) in Georgia, Maryland and Virginia in 1995 - 1998 after completing his Bachelor of Science degree in Environmental Science at Jacksonville University. Following this, he was part of the Avon Park Air Force Range Wildlife Section as a wildlife technician.

In 2005, Keith completed his Master of Science degree in Wildlife Conservation at the University of Florida. He was hired at Crystal River Preserve State Park as the Park Biologist.

In 2015, Florida’s governor and cabinet honored him with the prestigious Resource Manager of the Year award.

Keith has been the Environmental Specialist at Paynes Prairie Preserve State Park near Gainesville since March 2018.

END_OF_DOCUMENT_TOKEN_TO_BE_REPLACED 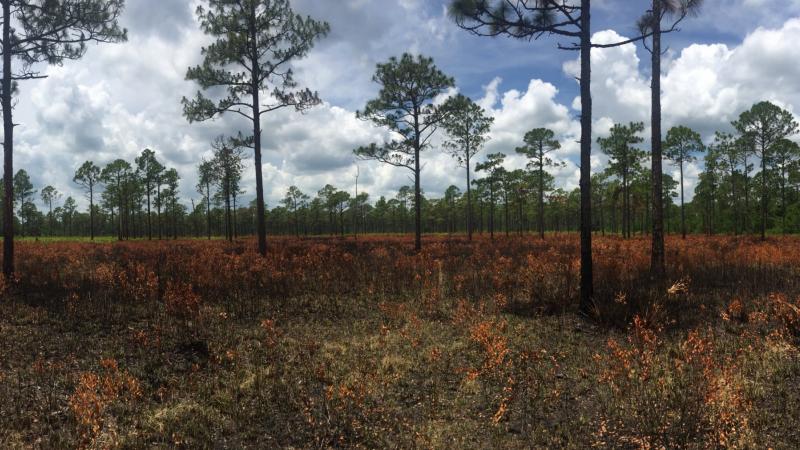 Many of Florida's natural landscapes depend upon fire to develop and maintain healthy ecosystems and reduce the risks of wildfire. Join Environmental Specialist Matthew Hodge in this edition of the Biologists Tell the Story as he describes planning for a prescribed fire and measuring the success of this tool.