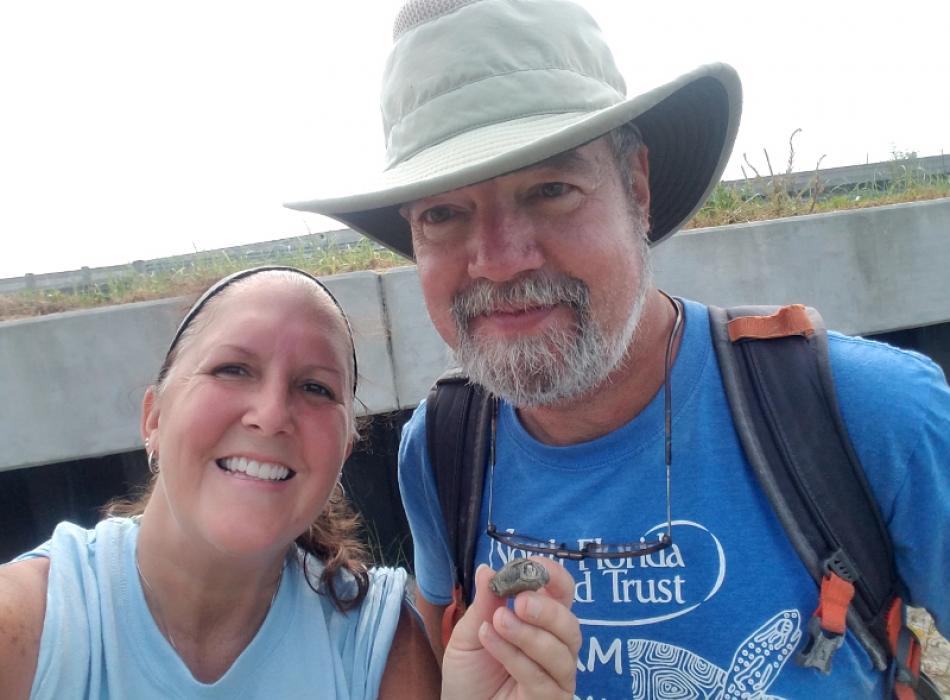 Paul Dunn grew up in the Orlando area and retired with his wife to Fernandina Beach in 2013.  He became interested in the natural world and was taking a Florida Master Naturalist Class where Emily Dunn of the North Florida Land Trust gave a talk about Diamond-Backed Terrapins and their ongoing research project at the Talbot Islands State Parks.  Paul was inspired and started volunteering for Team Terrapin (a group of local citizen scientists coordinated and trained in the monitoring and protection of nesting terrapins). He will begin his fourth season helping with nest monitoring in 2019.

Terrapin nesting season is April through September, so when the season ended Paul wanted to continue volunteering at the park.  He went out with Allison Conboy, Park Services Specialist, and Dr. Keith Ashley, University of North Florida archaeologist, to survey Hurricane Irma damage to an archaeological site and got hooked. Paul became a Heritage Monitoring Scout for the Florida Public Archaeology Network and received excellent training on monitoring sites.  He also attended UNF’s Field Archaeology School at the park, where three UNF students joined Paul as volunteers.  The goal in monitoring sites is to photograph and document the conditions and changes over time, and to identify potential threats.  Some sites are being lost due to tidal and storm erosion and it’s important to document them now before they disappear.

According to Paul one of the best sites in the park is the Grand Ring Site on Big Talbot.  It is a shell ring built as a monument by Timucuan Indians approximately 1,000 years ago and is unique in having a burial mound on top of it. Big Talbot Island State Park plans to build a trail with interpretive signs and open this site to the public within several years, and Paul hopes to be a part of that project.