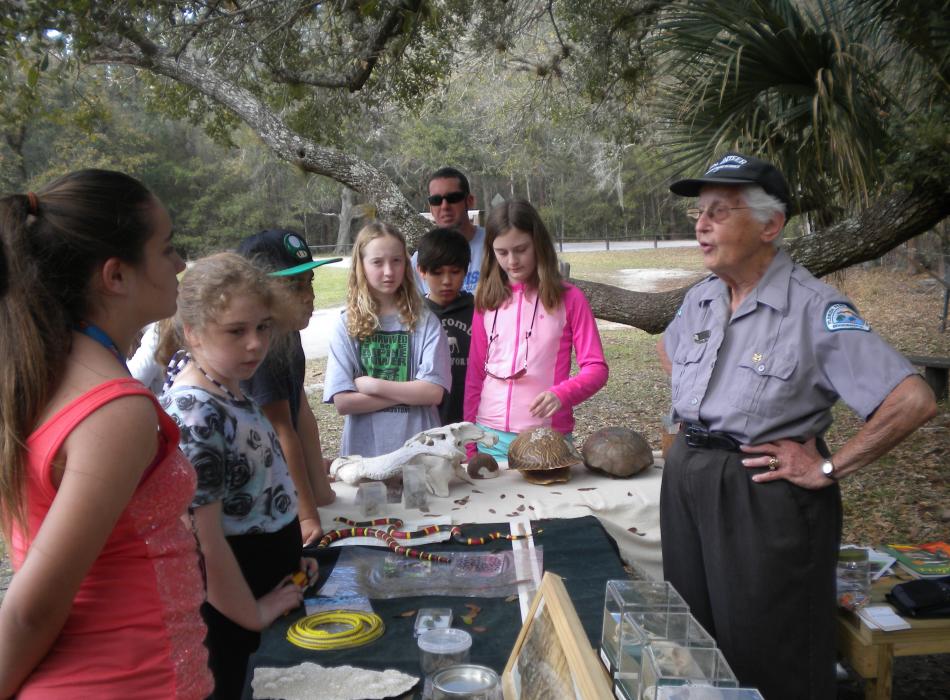 Myra Coggeshall grew up in a small Missouri community near St. Louis. She has often said that “Volunteering is a great way to retire.”

The Coggeshalls were a “camping family” and she often took her and five sons on camping trips every summer. Her husband's interest in tropical climates and environments brought them to Florida in the early 1980s. They began volunteering at Highlands Hammock State Park in 1998. Having spent time along Florida’s beaches, Myra was drawn to Highlands Hammock because of the old-growth hammock, cypress and hardwood swamps, pinelands, scrub and other habitats found in central Florida. Myra loves the outdoors because “It’s never the same! You always see something different!”

Although Myra is primarily a camp host, and Myra enjoys checking in campers on busy Friday nights, her forte is interpretation. One of her most important contributions has been the creation of the Exploration Station Nature Exhibit, the park’s collection of snake skins, skulls, bones, scat, tracks and other items that inform visitors of “what they might see in the park.”  A lifelong learner, she delights in discovering and sharing information.

The trails, where Myra can always be found, and the diversity of ecosystems one experiences while on those trails, are her favorite things about the park. She thoroughly enjoys doing ‘Roving Interpretation’ on park trails during the spring the most.

Spring is her favorite season because of the arrival of swallow-tailed kites and the cypress trees with their fresh growth of feathery green leaves. Doing roving interpretation is not only an opportunity to meet new people, but also educate them about all the amazing things that they can see along the trail. Myra embraces meeting people and, in her words, “perhaps sparking an interest in all that the park has to offer.”

Myra would like to continue volunteering as long as her age and health permit, and she is planning to work on creating a program on Cracker Culture for Saturday Night Campfires over the summer. Myra has said that she feels “Privileged to work with some most remarkable people, both volunteers and staff.”