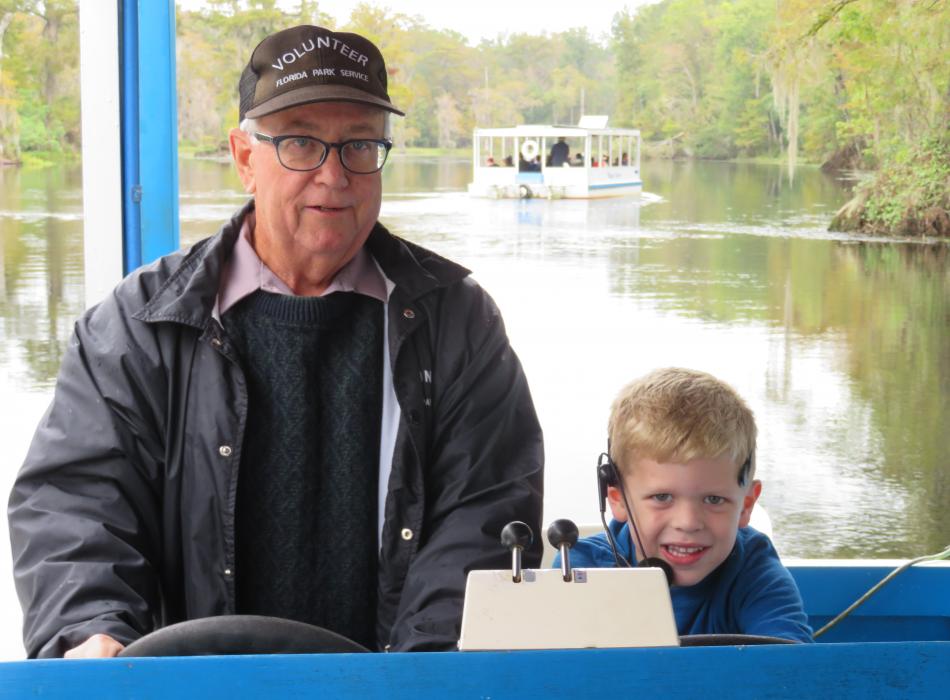 “Hey, Captain Jim,” exclaimed the 5-year-old visitor. “Hey, Captain Corbin,” replied park volunteer Jim McGill. Their greeting was followed by a brief hug. Jim and Corbin were obviously best buddies, and the rainy Sunday in October did not dampen their joyful reunion. Prior to the start of kindergarten, Corbin and his grandmother, Susan, came to the park every Monday for over a year. Jim McGill was always their river boat guide.

To better engage young visitors, Jim often lets a child “help” him captain the boat. Corbin jumped at the chance to be a “co-captain” and was a natural. Jim was impressed by his knowledge of the butterflies as well as his desire to learn. Corbin was a quick study, as he rapidly absorbed the names of birds and other animals. Jim and Corbin soon became fast friends.

As a Georgia native, Jim discovered Wakulla Springs during the time of Edward Ball. After he married in 1975, Jim visited the future park on holiday with his wife and her parents, who owned a small weekend place on the coast. Drawn to life on the water, Jim and wife moved to the area in 2001 and built their home on the coast. As an experienced boat captain, Jim answered a park advertisement for volunteer river boats guides in 2017.

Jim is a natural interpreter, who likes history. During his time on the river, Jim has greatly expanded his knowledge of the park. He has quickly become a popular tour guide. When interacting with the public, his fondness for people is apparent. Jim generously spends time with visitors on and off the boat, inspiring guests with his knowledge and appreciation of Wakulla Springs State Park. He entertains them with his unique perspective. When a passenger tells him “best boat tour I’ve had,” Jim responds, “Come back again, I’ll try to do better.”

Jim understands that Wakulla Springs State Park represents a glimpse into the past, a chance to see Old Florida. Through his efforts, he is helping visitors to understand the history and significance of the park. Jim is a talented volunteer, who displays great humility. When asked what he enjoys most, he replies “when a visitor says they had a good time.”