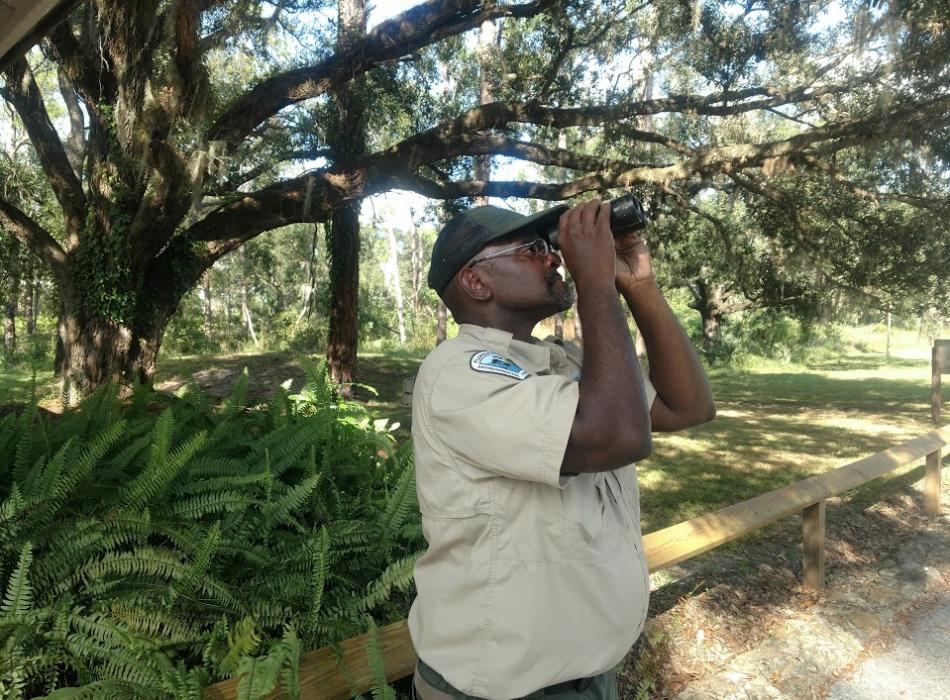 Blake Lewis is a Florida native having grown up in Sebring, Florida. He has been a park ranger at Highlands Hammock and Lake-June-in-Winter Scrub Preserve for nearly 20 years.

The Sebring residents know him well, making him a bit of a local celebrity. He is infamous for having a unique sense of humor with his banter keeping visitors entertained during their visit. He and Myra Coggeshall, a long-time volunteer, often work together on the busiest days, making sure that campers are checked in properly and welcoming them to the park.

When Ranger Blake Lewis is not working the gate in the ranger station, he may be found performing various maintenance tasks, helping with opening and closing duties, or doing any of the myriad tasks which engage park rangers daily.

Blake is the “eyes and ears” of the park! He maintains a close watch for the tracks and movements of Florida panthers and other species. His curiosity and keen observation have made him an exceptional wildlife watcher. It was Ranger Lewis who first noticed the presence of a Peninsula newt, a subspecies of the Eastern newt, in the park some years ago.

Blake is very adept at species identification and assists with the North American Butterfly Association counts.

While Blake has a penchant for wildlife viewing, his passion is for birding. He leads his own program at the park called “Birding with Ranger Blake” which takes visitors on a walk through the park to spot different species of birds.

For the 2018 National Geographic Year of the Bird celebration, he led a late October hike that focused on fall migrants. While providing tips to beginning birders, Blake intrigued advanced birders with observations of birds, snakes and other wildlife gleaned from his many years of experience. He has impressed many a visitor and been invited to speak at various programs outside the park.

Blake truly embodies what it means to be a park ranger with his dedication to the park and passion for sharing knowledge.