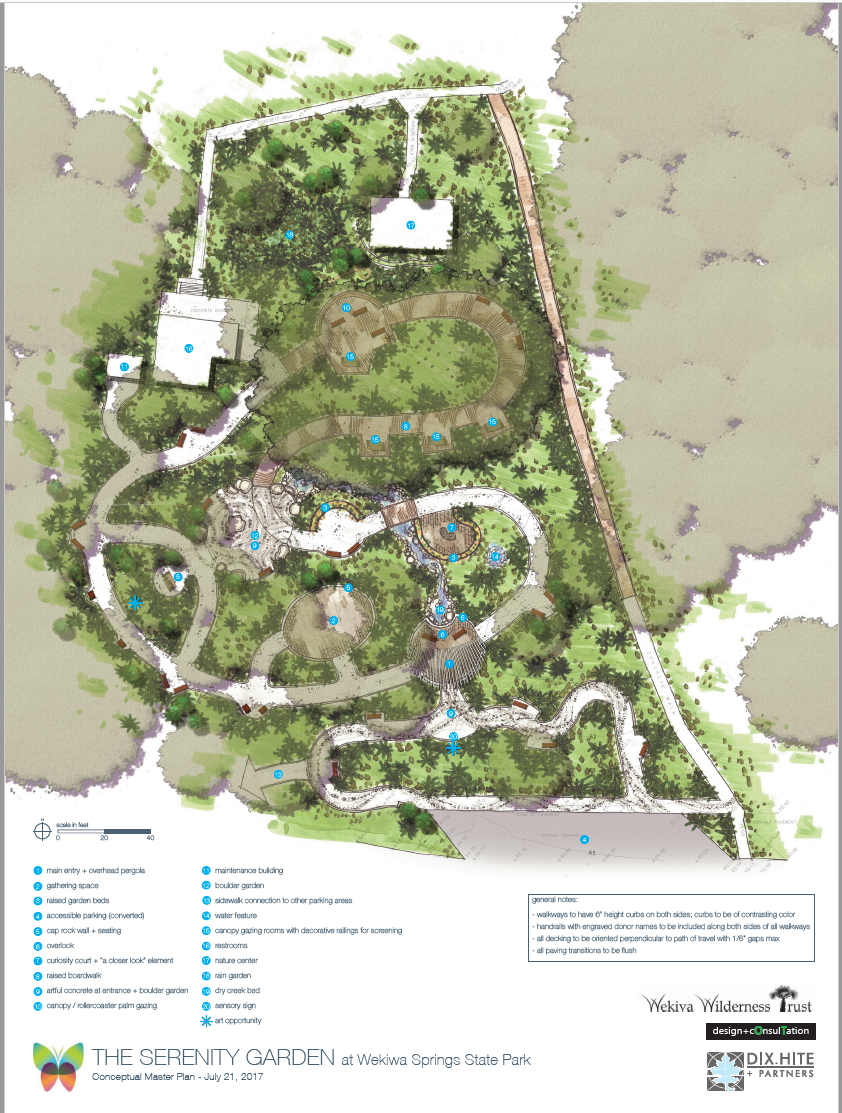 After months of detailed fine-tuning, the final concept design for the Serenity Garden at Wekiwa Springs State Park has now been completed. Even though construction has not yet started, the garden, believed to be the first of its kind in the nation, has already attracted the attention of the medical and therapeutic community.

Faculty and graduate students from Adventist University of Health Science’s Occupational Therapy Department recently spent two days at the site as groundwork for the first evidence-based research study to be performed at the garden.

The ongoing study will explore quality of life impacts of the Serenity Garden’s design and programs for four specified groups: seniors, people who have lost their sight, Wounded Warrior veterans, and children and adults with autism.

National and regional expertise has been engaged in designing the garden according to evidence-based principles established by the American Therapeutic Horticultural Association. The garden, the first of its kind in any state or national park, represents the next innovative wave in the movement to expand equitable access to nature for people of all ages and diverse abilities.

It will offer a peaceful, welcoming retreat in which people can feel comfortable while enjoying unique experiences surrounded by nature. The garden, which has doubled in size, will transform 1 acre of disturbed land behind the existing nature education center. Lushly landscaped with a palette of native plants, the garden will feature interactive and sensory elements, and enhanced opportunities for relaxation, exercise, social gathering, education and therapeutic programming.

The use of specialty gardens for the enrichment of human health and wellness dates all the way back to the Middle Ages. In the 21st century, here in the United States, research at major hospitals and universities began to produce a body of modern evidence, and it is now understood that time spent in green spaces can benefit human health in ways both culturally significant and scientifically measurable.

Through its participation in this research, the American Therapeutic Horticultural Association eventually solidified a set of evidence-based principles that became the standards for the development of gardens used for therapeutic purposes.

Gardens now serve in therapeutic capacities at many hospitals, rehabilitation centers, psychiatric facilities, nursing homes and vocational rehabilitation programs all across the country, but none are as comprehensive as the Serenity Garden at Wekiwa.

The landscape architecture has been specifically designed to the highest possible standards and purposes of accessibility, universal design, education, safety, and enjoyment by visitors of all ages and abilities.

The design represent a seamless melding of highly accessible features that support sensory, physical and emotional restoration and revitalization for visitors with diverse needs and abilities, and facilitates the highest possible level of enhanced opportunity and engagement for recreational activity, exercise, educational and therapeutic programming for visitors of all ages and abilities.

Detailed site plans are now being prepared to allow work on the hardscape to begin in the next few weeks.