Tropical Storm Isaias: All parks and overnight accommodations which were closed due to the storm have re-opened.

Limited Visitation at this Park

Effective July 21, 2020: Lake Griffin State Park is open (see hours of operation and fee information below). Restroom availability may be limited. The campground is open for those with a reservation. The picnic area, nature trails and boat/kayak launch are available. Visitors are expected to maintain distances of at least six feet apart.

Back to Lake Griffin State Park

Native Americans traveled and fished in this area for thousands of years. The first white settlers, Major Orlando and Josephine Rooks, built their home in 1877 and named the town Fruitland Park.

From 1904 until 1910 J.D. Robertson used tracts of longleaf pine that is now the park entrance, shop and ranger residence for a turpentine still. The land was used for farming and citrus through the 1920s and 30s. Initial purchase of 383 acres to create Lake Griffin State Park began in 1946 under the Murphy Lands Act.  The surrounding area continued to be covered with orange groves into the 1980s.

Additional acreage was purchased through the years and after the City of Fruitland Park donated four acres in 1961, work began on park facilities. Construction was completed in 1963 and the park was opened to the public. 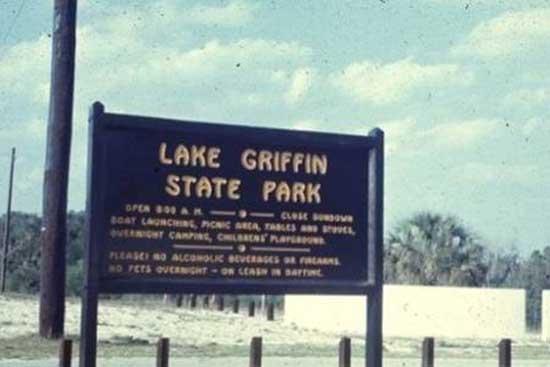 This redwood park entrance sign was made at the Florida Park Service's sign shop located at Mike Roess Gold Head Branch State Park. Such signs were carefully hand-routed by sign shop craftsmen and served as signature symbols of Florida State Parks across the state. The Florida Park Service adapted its wood sign standards from the U.S. National Park Service. The hand-crafted wood signs have slowly vanished over time, being replaced with more economical and lower maintenance structures. There are still a few of these rare signs marking some of the state park entrances, so be on the lookout for a true Florida State Park historical treasure. 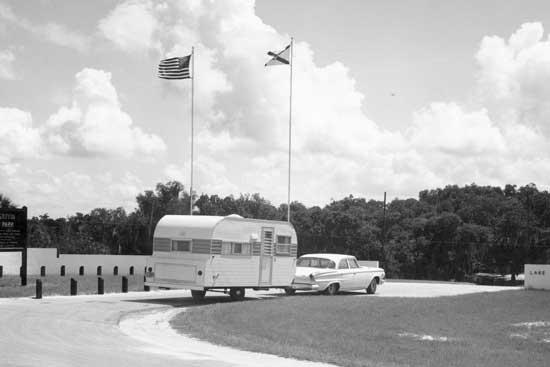 At Lake Griffin State Park, a series of six curving concrete block walls mirrored similar details found in typical 1960s recreational facility design. Lake Griffin's entrance was, and continues to be, divided by a small median allowing for the central placement of the traditional iron pipe flag poles. This particular design for flag poles, found in many Florida State Parks of the era, was most likely created by park staff welding together a series of galvanized pipes of different diameters resulting in the appearance of a tapered pole.

As a testament to ingenuity and the use of available inexpensive hardware, what appear to be copper balls atop the poles are really copper toilet tank floats. Although replaced several times through the years, the floats continue to occupy the top of the staffs. The daily routine of raising and lowering the United States and Florida flags, and now the POW/MIA flag, is a ritual carried out at most Florida state parks and typically signifies the opening and closing of the park. 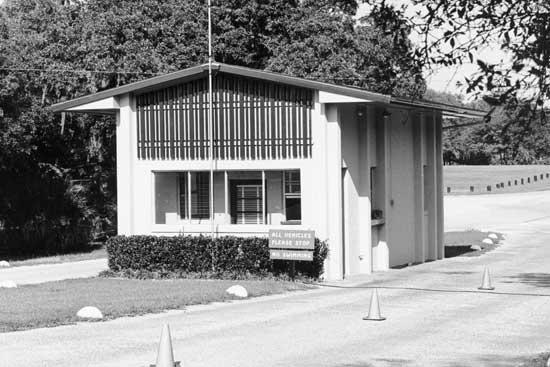 Just past the park entrance is the ranger station. The hub of all activity within the park, visitors make their first contact with park staff at this location and entrance fees and camping fees are collected there.

With the exception of a few hurricane days, Lake Griffin's ranger station has been continually staffed from 8 a.m. to sunset, 365 days a year since the park opened in 1963. The park was created to accommodate recreational fisherman who come to the area for the lake's renowned bass fishing. The park boat ramp provides access to Lake Griffin and the nearby campsites provide anglers with a place to stay while fishing. 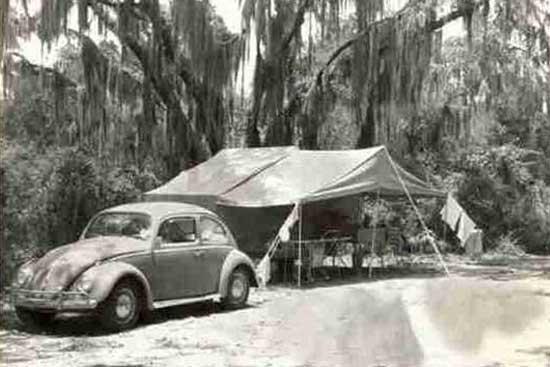 Camping sure has changed through the years. When the park opened in 1963 there was no campground and 10 to 15 interim camp sites were placed in the picnic area until the regular campground could be completed. Planners have adapted the campsites from accommodating just tents and pop-ups to allowing for large RVs and motor coaches with slides. 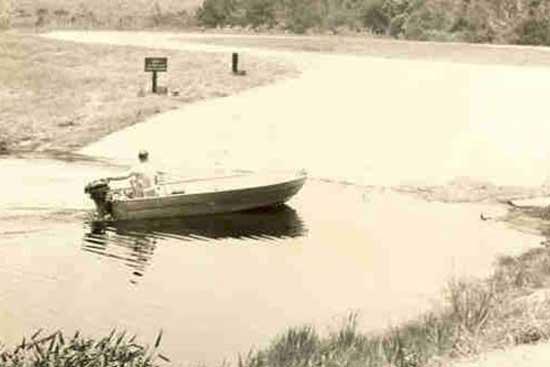 The double-wide concrete boat ramp provided stable and improved boating access to Lake Griffin. This boat ramp has allowed thousands of anglers and recreational boaters to access Lake Griffin and the Harris Chain of Lakes. In this photograph, the ramp construction has been completed but the dock and bulkhead are still in the planning stage.

On the day the concrete for the ramp was poured, the first superintendent of Lake Griffin State Park, Lieutenant Zane DeLoach, was out inspecting the freshly poured concrete ramp when his pet dog jumped out of the park truck and proceeded to run through the wet mix.

Today, a close look reveals paw prints embedded in the ramp and a few signatures of park staff and family members who witnessed that date in history.