Ichetucknee is a very special place.

My first visit to the springs and river was in 1977, on a family tubing trip. I was 11 years old. We floated the river on old-fashioned, tractor tire inner tubes, but my brothers and I quickly took to the water to snorkel and explore the spring run.

We swam and floated downstream and soon entered an open, sunny expanse bordered by tall marsh plants. The river current picked up, and the sunshine afforded a great view underwater. I dived down and let the water carry me away.

I look back now after all these years and realize that dive was one of those special moments in childhood that are “frozen” into my brain. The water was fast and crystal clear. Eelgrass and other submerged plants whipped wildly back and forth in the strong current. All kinds of fish darted in and out of this aquatic garden, and a few turtles frantically ducked into the safety of the plant cover. Tiny snails dotted the river bottom. I surfaced and shouted back to my brothers, “Wow!! I LOVE this place!”

That experience was one of the many reasons I later joined the Florida Park Service. I wanted to be on the team of professionals who helped keep that memory alive and relevant. I was (and still am) the luckiest guy on Earth to return to Ichetucknee Springs State Park 18 years later as its park biologist. I have been working here for 24 years now, and that memory still serves as a personal touchstone to the pristine beauty the Ichetucknee can hold for future generations.

Mr. Al Burt, author of “The Tropic of Cracker,” perhaps summed up the magic of these springs best when he wrote, “The Ichetucknee’s waters bubble up out of the ground and flow like melted diamonds across a sandy bottom through a natural forest.” This sentiment reflects, in part, why Florida’s springs are so popular. Each is a special place. But each one is in danger of being loved to death.

Ichetucknee Springs was purchased by the state of Florida in 1970. This year marks its 50th anniversary as part of the Florida State Park system. With more than 2,300 acres, the park straddles the first 3.5 miles of the Ichetucknee River, which flows a total of six miles to the Santa Fe River. Its short course boasts a whopping 44 species of freshwater and brackish fish species. There are 11 recorded aquatic turtle species here, making this system one of the most diverse turtle assemblages in North America. Coffee Spring, near the southern end of the park, is the home of the Ichetucknee Siltsnail, found nowhere else in the world.

Many large springs and smaller flows combine to make the Ichetucknee River a first magnitude system with a discharge of over 200 million gallons per day. The continual refreshing of the river by all these springs contributes to its remarkable flow and clarity. They are what make the Ichetucknee world-famous as a floating and swimming destination.

The Ichetucknee River was immensely popular for tubing even before it became a state park. Once a state park, the Florida Park Service quickly instituted many decisive resource management programs to protect the springs and river. But for several years, tubing, the number one recreational draw to the park, remained unmonitored and unregulated. On some summer weekends, the park admitted over 5,000 people per day—all tubing the river and launching from the head spring.

Because of the shallow spring-run water and tubers wading in these stretches, foot contact with the river bottom uprooted underwater plants and eroded enormous troughs in the soft river bottom. Large swaths of the river were completely cleared of aquatic plants. Aquatic plants are a vital food source and habitat for the river’s wildlife. Clearly, to preserve and restore the aquatic habitat, action was needed.

In 1978, the Florida Park Service funded a first-of-its-kind river carrying capacity study to figure out how to protect the river while making sure that visitors could experience it. It was conducted by University of Florida graduate student Charles DuToit, who later went on to work in the Florida Park Service as a park biologist. His study measured the species-by-species sensitivity of aquatic plants to human disturbance, evaluated species resilience and recovery parameters, identified areas that should be isolated from tubing recreation and recommended an overall carrying capacity for river use through which submerged aquatic vegetation (SAV) recovery could be monitored.

The Florida Park Service adopted most of the study recommendations with minor adjustments. The park established a plant and erosion monitoring program based on underwater photos in late 1979. Sensitive areas just downstream from the Head Spring and Blue Hole Spring were fenced and posted as restricted areas. The park instituted a formal tubing season from Memorial Day weekend through Labor Day. Tubing was discontinued after Labor Day from the upper stretch of the river to allow for plants to recover during subsequent months. An initial, experimental carrying capacity of 3,000 tubers per day was established.

Photo point analysis determined that this initial capacity was too high, especially at the shallow Head Spring Run. In 1983, we subdivided the river into three sections with three tubing launch points. From the northernmost launch near the Head Spring, a total of 1,500 tubers per day during the tubing season was allowed, with an additional 1,500 tubers from Midpoint to retain the original 3,000-person entire-river capacity. Tubing from Dampier’s Landing, along the deeper, wider floodplain reach of the river, did not have a formal limit beyond parking lot capacities. Year-round tubing was allowed from Midpoint Launch downstream, and the Memorial Day Weekend-to-Labor Day tubing season was maintained at the northern half.

Continued photo point analysis determined that, although conditions had improved since 1983, the SAV beds still were not recovering. The carrying capacity was modified for a second time in 1989, retaining the three-launch system but reducing the number of tubers from the North Launch. The former 1,500-limit was halved to 750 tubers per day during the tubing season, with the remaining half added to the Midpoint limit to yield 2,250 tubers per day (retaining the original 3,000-person entire-river capacity). This is still the carrying capacity used today.

Quantitative data-collection began in 1989 with 15 of the original photo point locations. Transects were determined based on subjective observations of river use patterns by tubers. Some were set as control transects—those which appear to receive very little to no bottom damage from tuber passage. Others were set as impact transects—those at which tuber wading and bottom foot contact are consistently observed. By 2016, this number increased to 20 transects to yield seven control sites and 13 impact sites.

Transects are defined by sets of anchor hooks set into the trunks of riverbank trees. A measuring line is stretched taut between the hooks, and a vertical line-intercept method is used to record SAV bed boundaries, species composition and stem density across the river. Data on substrate composition and algae coverage are also recorded. Finally, depth soundings are taken at 5-foot intervals across the river span to yield a bottom profile.

This SAV-monitoring tool is a “quick” assessment to determine if the carrying capacity for the river is working. In very broad terms, graphed data of total SAV cover showing negative regression over time indicates continuing degradation. Positive regression indicates recovery and transects at near-equilibrium show a “see-saw” effect in which summer degradation is balanced by winter restoration and the regression is near 0.

Data interpretation from all transects since 1989 has yielded positive recovery results to near-equilibrium conditions at nearly all locations. This is a very good indication that the north 750/midpoint 2,250 capacity, for the time being, is an effective tool for balancing river recreation with aquatic habitat preservation.

What I’ve Seen During My 24 Years

But, not so fast! Management by carrying capacity can be an unpredictable undertaking! It has proven very difficult to pinpoint in the 30-year monitoring cycle exactly which factors are resulting in the dramatic regrowth! And it may not be just keeping people off the (eel) grass!

Water-quality researchers at the park over the last 20 years have documented other factors that impact the river. Pollution, spring flow, droughts and floods, turbidity or cloudiness of the water, vegetative cover, exotic species and more all impact the river and surrounding ecosystem.

Hopefully, Ichetucknee’s SAV program will remain an effective tool for monitoring the river carrying capacity. It is also my great desire that another 30 years (and more) of monitoring will render even more insight into these secondary SAV-health effects.

Sam Cole is a second-generation “parkie,” growing up and volunteering in several state parks before joining the Florida Park Service in 1989 as an interpretive park ranger at Edward Ball Wakulla Springs State Park. He received his Bachelor of Science in Biology from Florida State University in 1993. Afterward, he worked with the biology team at District 4 and then came to District 2, stationed at San Felasco Hammock Preserve State Park and Ichetucknee Springs State Park. He enjoys sharing his enthusiasm through interpretive programs and the local high school student partnership. The river has changed from when he was an 11-year old kid. However, he needs little excuse to get on the Ichetucknee River and can still be heard from time to time exclaiming, “Wow!! I LOVE this place!”

Previous articles in the series can be found here.

END_OF_DOCUMENT_TOKEN_TO_BE_REPLACED 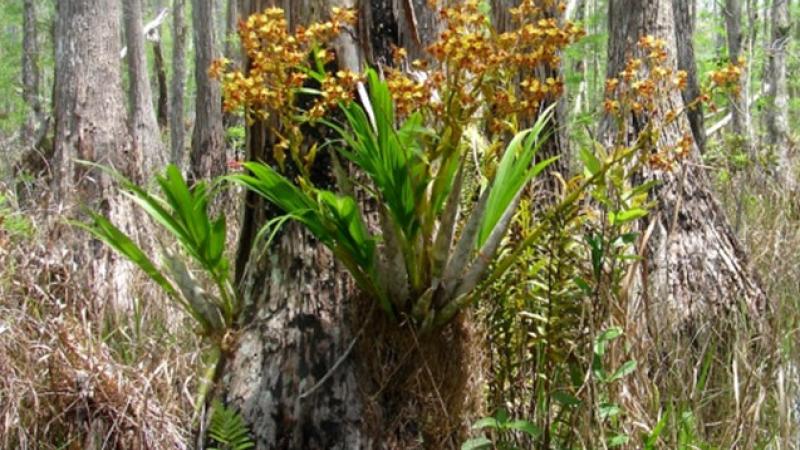 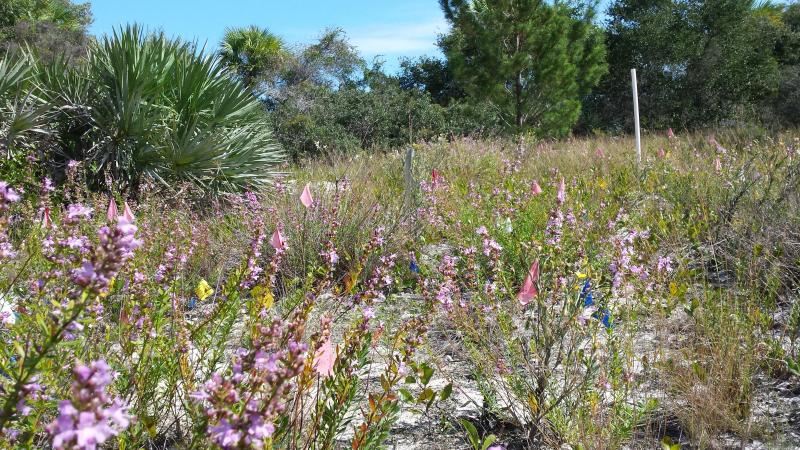 Saving the endangered Savannas mint has been a challenge at Savannas Preserve State Park. A partnership with the Bok Tower Gardens’ Rare Plant Conservation Program as made all the difference in saving this plant that blooms with beautiful purple flowers in the fall. Biologist Douglas Rogers tells the story.