Longleaf pine is known by many names - turpentine pine, Southern pine, pitch pine and heart pine - but to most lumbermen of Northwest Florida it was simply yellow pine.

At one time longleaf, along with other lesser species, covered most of the southern United States so densely that only wiregrass grew beneath them. At 100-plus feet high and hundreds of years old, these towering trees commonly reached diameters of four to six feet. They were virgin timber, meaning they had never been felled by human hands.

The lumber from these trees was sought after as a building component in the shipping and construction industries.

The abundance of pine and the growing demand created a boom for West Florida and started a new era of rail transportation.

In 1828, Juan de la Rua, a prominent Pensacola businessman, sold 680 acres on Pond Creek to Joseph Forsyth. Forsyth started his venture quarrying iron stone and soon brought on partners Andrew and Ezekiel Simpson to help him with his original intention of building a sawmill. His first mill was located three miles up Pond Creek and was known as Arcadia.

The mill was a success and by 1836 was producing 5,000 board feet of lumber per week! The increased production made the use of winding creeks an inefficient means of transport. The owners consulted with Timothy Twitchell to build a canal but instead chartered the Arcadian Railroad Company.

By 1838 this 3.2-mile rudimentary rail-line was completed, and in 1840 the Forsyth and Simpson mill was moved to the mouth of Pond Creek at a location he named Bagdad.

The birth of the Blackwater Heritage State Trail truly began here. The mill at Bagdad prospered and the main rail line was built and grew in length as the trees were cut and hauled back to the mill. Camps along the rail grew from mere tents to more sophisticated homes as the workers' families joined them in the forest.

The town of Munson and the community of Roeville were two areas named after camp managers that still go by their names today. The railroad changed hands and names over the years and suffered a serious setback in March of 1862 when retreating Confederate troops systematically burned all 14 mills across the county.

After the war, the mill was rebuilt and by 1870 it was again the leader in lumber production. 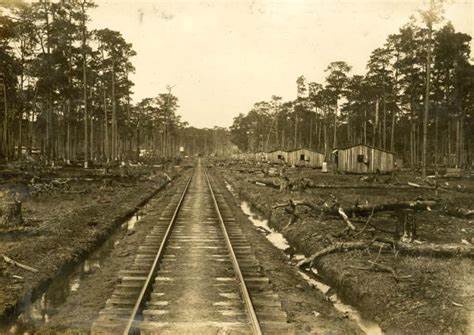 The sawmill end of the road was typical of a logging line. The rail line was never placed legally in common service, yet its mixed train passenger service was published in the official guide and became widely known as the Florida and Alabama Railroad.

By 1920, the line went all the way to Whitty in Alabama, part of what is now known as the Conecuh National Forest. The railroad prospered until the mill closed in 1939.

In 1943, the U.S. Navy reconstructed the southernmost 5½ miles and added a 4-mile spur at Roeville. The Navy used the road to build and operate the flight training facilities that became Naval Air Station Whiting Field. The Navy used the line until the mid-1970s when it was left unused and abandoned.

Local efforts began in September 1989 to convert the property to a rails-to-trails linear park.

In February 1990, the largest group of citizens (500) to gather at a public meeting in Santa Rosa County history listened to a presentation at the county auditorium. Efforts toward the conversion of the property into a premier multi-use trail were coordinated through city, county, state and federal agencies.

The U.S. Department of the Interior transferred title of the land to the state of Florida on November 4, 1993, and on February 20, 1999, the property was dedicated as the Blackwater Heritage State Trail for the general public’s park and recreational use.