Geology of the Coquina Rocks

Step into the past...

Walk along the shoreline at Washington Oaks Gardens State Park, and you’ll feel as if you’ve entered another world.  The second largest outcropping of Coquina rock is found here, giving visitors a glance back at geologic time. Coquina rock is a type of sedimentary rock (specifically limestone), formed by the deposition and subsequent cementation of mineral or organic particles on the floor of oceans or other bodies of water at the Earth's surface. In other words, the rock is formed by the accumulation of sediments.

The Coquina rocks at Washington Oaks is part of the Anastasia formation, which stretches from St. Augustine to Palm Beach County, and was created during the Pleistocene era (12,000 - 2.5 million years ago). During that era when sea level was lower, shells and sand were exposed to rain. The slightly acidic rainwater dissolved some of the calcium carbonate in the shells, which “glued” together the sand and shells into rock. If you look closely at the rock, you can see millions of the individual shells and sand cemented together.

One particularly interesting characteristic of the rocks are the regular, perfectly cylindrical holes in many sections of the formation. The perfect circles were likely formed from erosion of rock by rainwater which has collected in a depression on the rock’s surface. Over time, similar to the rocks original formation, the acidic rain dissolved away some of the rock creating a larger and larger circle with each rainfall. This is a common process in limestone rocks.

The word “coquina” is Spanish for “cockle” and is the name given to the small, burrowing clam that lives in the sand just at the ocean’s edge. This is the main shell component to the rock. The scientific name for the clam is Donax variabilis, as the shells of the clams can be various colors.

When you visit the rocks, you can witness seasonal changes in the structure. The Coquina rock shoreline can be exposed or covered up by different storm events as sand gets shifted around. From one season to the next, the beach can look entirely different!  The formation may also look devoid of life, but look closer. There are entire ecosystems thriving both on and around the rocks. Different species of snails, urchins and algae call the formation home and rely on it throughout their life cycles.

Come explore the Coquina rocks at Washington Oaks for a both a lesson in geology and a beautiful day at the beach! 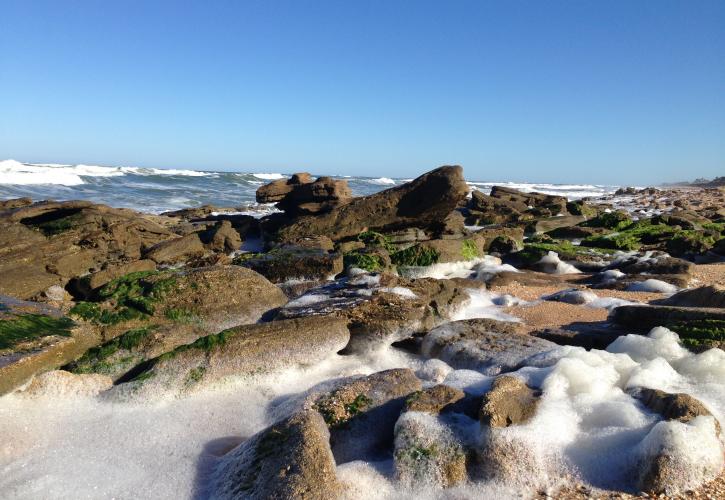 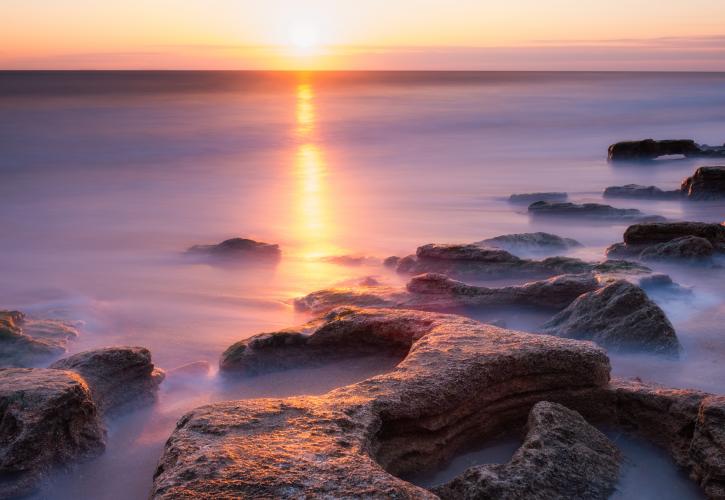