Learn about Florida’s history through the artifacts and objects found at our state parks.

Scuba diver George William Guest found mammoth bones and artifacts eroding from the bed of the Silver River. The site was excavated by underwater archaeologists in the 1970s and reviewed again in 2017.

Two juvenile Columbian mammoth skeletons were found with butcher marks on the bones in close association with paleolithic artifacts such as a Clovis spear point and curved ivory shaft.

Flint knapping is the process of shaping brittle stones into a different shape to make points for tools or weapons. The flint of this point was knapped with other rocks, bones or antlers after being heated in a fire. The curved ivory shaft was carefully carved out of the tusk of a mammoth, mastodon or another large Ice Age mammal.

An arrowhead or point was mounted on the curved ivory fore-shaft of a wooden spear. The spear was thrown at large animals with a spear-thrower or atlatl. The atlatl gave the spear more power to pierce the skin of an animal.

These and other artifacts found in this area suggest that nearly 12,000 years ago Pxaleoindians often lived near springs and other sources of fresh water. They were mostly nomadic, relying on a variety of animals and plants for food, including the big game of the Ice Age.

Were the people of this area directly hunting Columbian mammoths at this site with atlatls? Or was this a butchering site where animals were processed and spears were lost?

The site does tell us that Native American people have been here for a very long time. At first, the archaeological community did not accept that this site could have shown humans interacting with Ice Age animals. We now know that humans were around a lot longer in the Americas than previously thought and that, while this site is unique to the east, humans were also hunting mammoths elsewhere in the Americas at that time. 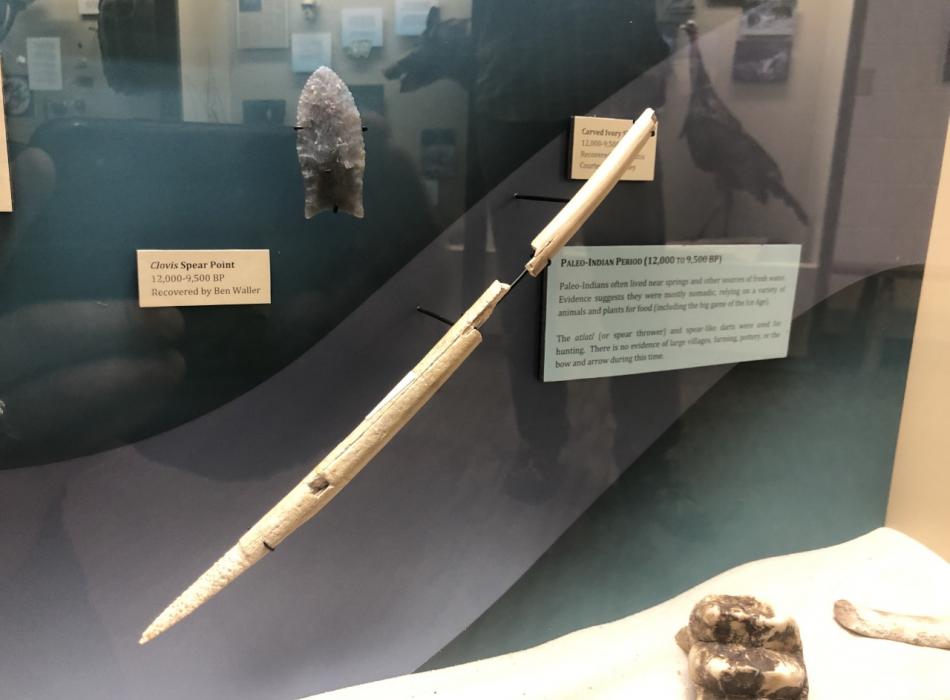